Bianca Toeps is 36 and from the Netherlands, although she now spends three to six months a year in Tokyo. She divides her time between building websites, photography and her online shop. She photographed and designed the cover of her 2019 book, But you don’t look autistic at all, which has now sold more than 15,000 copies in The Netherlands and has recently been translated into English. Bianca received her autism diagnosis at the age of 25.

Bianca: In my book, But you don’t look autistic at all, I look at a number of misconceptions about autism. One that bothers me a lot is the idea that autistics wouldn’t feel empathy. To quote from my own writing:

‘In 2007 a silverback gorilla named Bokito escaped from Blijdorp Zoo in Rotterdam. He attacked a woman, who sustained hundreds of bites, various broken bones and a shattered hand. The woman was under the impression she had a special bond with the ape: he “smiled” at her and made eye contact. That by making eye contact she was provoking Bokito never occurred to her. Not even after the zoo staff’s repeated warnings.

The misinterpretation of animal behaviour is a well-known phenomenon. Pet owners, for example, often project their own feelings and thoughts onto their pets, and you can hear them say things like “my cat is really stubborn” or “my dog felt guilty”.

According to Damian Milton, a researcher at the University of Kent, a similar difference occurs between autistics and neurotypicals: the double empathy problem.

People like to fill in thoughts and emotions for others. They do this based on their own experiences: “After hearing news like that I’d cry, so if you don’t, that means you feel less sadness.” Even though Milton’s theory poses that the empathy problem works both ways (hence the word double), it’s the neurotypicals of this world who determine the desired, “normal” reaction to all sorts of events and emotions. It’s the neurotypicals who are in the majority and therefore determine how we view autism.’

This has caused me trouble numerous times. Apparently it’s not okay to make jokes about deaths or disasters, not okay to question certain details about well-intended (but ill-informed) activist social media posts and very not okay to get all worked up about something other people perceive as small, when there’s still war and hunger in the world.

I still don’t really understand why jealousy seems to imply that someone cares, or why people who ask for an opinion get offended when that opinion is not as positive as they’d like.

But I’m telling you these things now, so I do know these are unacceptable behaviours in the eyes of most people. I learnt it. Mostly the hard way – albeit not as hard as the lady who thought that Bokito was her friend.

Still, it hurts when people assume you have bad intentions, or think you don’t give a damn about them. Especially when you do care, but are just too scared to go to their birthday party, give them a call or write them a postcard. “Who’s afraid of that?” Well, me. What if I come across as clingy, or stalker-y? What if they don’t actually like me, and secretly want to get rid of me?

I think my history of wrong interpretations has shaped me, and made me even more cautious. I can obsess over scenarios for hours, analyse other people’s words and writings, and my own actions, over and over again. Did I do something wrong? Did I say something silly? When I was younger, I often tried to clarify my words or actions later on, but that usually only made things worse.

Then, when I read about the double empathy problem, I realized: Wait, this isn’t just on me. The other party has a responsibility, too. They’re not silverback gorillas, they’re people.

As an autistic, I often feel forced to code-switch, to switch between two different types of behaviour: my own and that which is socially desirable. In my book I wrote about an instance at my yoga class:

‘My yoga teacher pulled out a small plastic battery-operated ball. “I will now demonstrate how powerful human energy is,” she said prophetically. She asked us to sit in a circle and hold hands. Two people then touched the little ball, which closed the circle. A light went on. “Wow!” my fellow yoga students exclaimed. I didn’t say anything, but in my head I was screaming, “We’re just connecting a negative and a positive here, this is first-grade physics!”

You can’t say things like that. Well, you can, but people won’t like it. They will assume you think you’re better than them, they will say you’re arrogant. But putting my opinions aside, nodding along, smiling and keeping my mouth shut makes me feel uncomfortable, empty and angry. It sets off too many error alerts in my head, so I try to avoid such situations.’

Code-switching can be rather exhausting, and worse, it makes me feel empty and alone. So I decided to change. I’m now more unapologetically myself, accepting the fact that it might cause people to misunderstand me.

I also try to raise awareness. Every time I hear or read something about autistics presumably lacking empathy, I switch it up: Did your daughter really not understand how to behave at Uncle James’ funeral? Or did you not understand her way of dealing with these emotions? Does your son really hate his baby sister? Or did you miss the fact that her crying sends him into sensory overload right away?

I hope my book will contribute to a better understanding of autistic people, by making people see things from our point of view. We’ve been studying “being normal” for our entire lives. It’s time for the neurotypicals to practice their empathy skills. 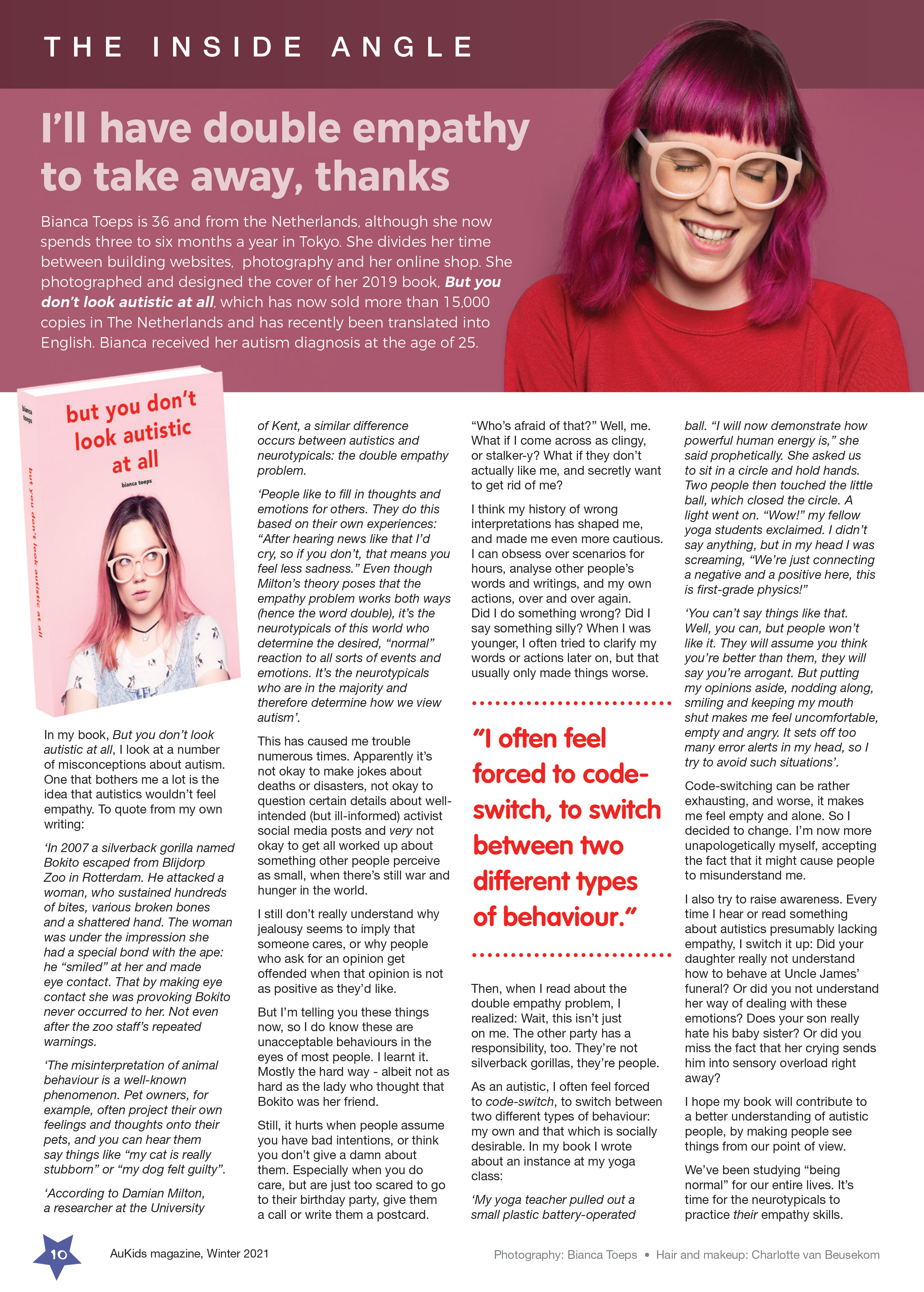